Dr. Nnamdi Azikiwe “Zik” Benjamin, a foremost nationalist and statesman was born at Zungeru in Northern part of Nigeria in 1904. At the time of his birth, Azikiwe’s father was serving as a clerk in the Nigeria Regiment at Zungeru. He attended schools at Onitsha, Lagos and Calabar before going back to Lagos in 1921 to further his education.

On leaving school, the young Azikiwe worked as a clerk in the Treasury office in Lagos. He travelled to the United States of America for further studies in 1925 where he attended the Lincoln University and the University of Pennsylvania. 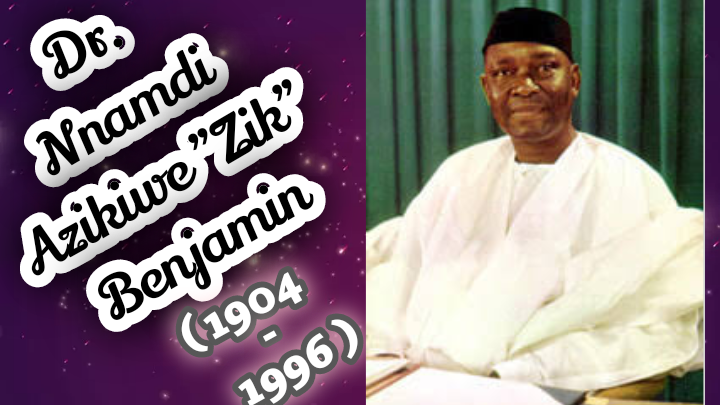 He was appointed the Secretary General of the NCNC party. He became the President of the party after the death of Herbert Macaulay in 1946. Dr. Azikiwe was a strong advocate of Nigerian unity.

The NCNC under the leadership of Dr. Azikiwe was the vanguard of the struggle for Nigeria’s independence. In 1946, Dr. Nnamdi Azikiwe led a delegation of the party to London to demand for the revocation of the 1946 Richards Constitution on the ground that there was no adequate consultation with Nigerians before its promulgation.

The delegation also demanded for immediate self-government. Predictably, the Secretary of State for the Colonies refused to meet the delegation.

Dr. Nnamdi Azikiwe also led a delegation of the NCNC (National Convention of Nigerian Citizen) to the 1953 Constitutional Conference in London.

After the 1954 regional elections, Dr. Nnamdi Azikiwe became the Premier of the Eastern Region. In December 1959, he resigned from the office and emerged as the elected President of the Senate in January 1960. He became the Governor-General of Nigeria on 16th November, 1960 and was sworn in as the first President of Nigeria on 1st October, 1963.

He held the office until the military coup of 15th January, 1966 which overthrew the civilian government. Dr. Azikiwe fled from Nigeria immediately after the coup and flirted with the secessionist regime in the early stages of the Nigerian Civil War. He later defected to the Nigeria’s side in 1968.

This historic decision did not only influence the course of the war, but it significantly demonstrated Azikiwe’s unalloyed commitment to the unity of the country.

After the ban on political activities was lifted in 1978, Dr. Azikiwe joined the Nigeria People’s Party (NPP) and, contested as the party’s candidate in the 1979 presidential elections. He came third in the elections behind Alhaji Shehu Shagari of the National Party of Nigeria (NPN) who won the election and Chief Obafemi Awolowo of the Unity Party of Nigeria (UPN).

His party, nevertheless, formed an accord with the ruling party just as the NCNC did with the Northern People’s Congress (NPC) in 1959. The accord collapsed in 1981 when the then Presidential Adviser on political Affairs, Chuba Okadigbo therefore dismissed Azikiwe’s political career as finished, he simply responded that no condition is permanent.

Dr. Nnamdi Azikiwe also contested the 1983 presidential elections and lost. Dr. Azikiwe was a seasoned politician and nationalist. He died on 11th May, 1996, and was buried six months later on 16th November. Several important national monuments have since been named after him including the Nnamdi Azikiwe Airport in Abuja and the Nnamdi Azikiwe University, Awka.

One remarkable thing about Dr. Azikiwe was his politics of compromise. He rarely took any hardline position on any political issue and he was always willing to put the interest of the country above sectional considerations. He was a proponent of fabian socialism and this ideological bent probably influenced his proposal of a diarchy for the country.