Chief Jeremiah Obafemi Awolowo was born at Ikenne, Ogun State on 6th March, 1909. He had his early education at Ikenne and Abeokuta before proceeding to Wesley College, Ibadan.

Chief Awolowo had humble beginnings and was a truly self-made Nigerian. He had a checkered career as a teacher, shorthand typist, newspaper reporter, businessman and trade unionist. He had always showed a great deal of interest in politics even as a young man. 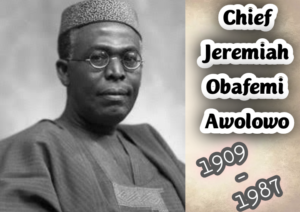 He became the Secretary of the Ibadan branch of the Nigeria Youth Movement (NYM) in 1940 and he was one of the founders of the Trade Union Congress of Nigeria in 1943.

After obtaining a degree in Commerce by correspondence, in 1944 Chief Awolowo travelled to England in the same year and returned to Nigeria in 1951 armed with a degree in Law.

In 1951, Chief Awolowo, along with some other politicians, founded the Action Group (AG). The party won the Western Regional elections held in 1951 and Chief Awolowo was elected to represent (Ijebu) Remo division. He became Leader of Government Business and Minister for Local Government in the region. Chief Awo used his organizational ability to good effect in the reform of the local government system in the region.

Between 1954 and 1959 Chief Awolowo served as the Premier of the Western Region and, during the period, he carried out significant reforms in the educational sector. In 1954, the legislature passed a comprehensive education law, which introduced free primary education in 1955. With this, the children of the poor who constituted the majority of the population had access to education.

His government also reduced the duration of the primary school programme from eight to six years and made promotion from one class to the other automatic. Chief Awolowo believed that “every Nigerian citizen must be educated at public expense to the limits of his natural ability to enable him to be in the finest possible state to produce the utmost he is capable of”.

Although Chief Awolowo was farsighted and visionary, he was never able to win national elections and achieve his ambition of becoming the president of the country. While he was the Premier of Western Nigeria, he made the region a model for others to follow. He also transformed the Action Group into a strong national party. He forged alliances with minority groups in the Northern and Eastern Regions in the hope of achieveing federal power but he failed to make the necessary impact in the 1959 federal elections.

After the elections, Chief Awolowo resigned as Premier of the Western Region and became the leader of opposition in the Federal House of Representatives. The deputy party leader, Chief S.L. Akintola replaced him as the Premier of the region.

A power tussle soon ensued between Chief Awolowo and his deputy, the Cleavage in the Ali and Awo’s firm opposition to the Federal Government brought together by an alliance of his opponents, culminated his trial and sentence to ten-years jail term on charges of treason in 1963. Some of his close associates such as Chief Anthony Enahoro and Alhaji Lateef Jakande were also sentenced along with him.

Chief Awolowo was pardoned and released by General Yakubu Gowon, after the military coup which brought Gowon to power on 29th July, 1966. He was later appointed Federal Commissioner for Finance and Vice Chairman of the Federal Executive Council.

Dissatisfied with the slow pace of the government’s planned return to civil rule, Chief Obafemi Awolowo resigned from the Federal Executive Council in 1971. When the ban on political activities was lifted in 1978, he founded the Unity Party of Nigeria (UPN) and was its presidential flagbearer in the 1979 and 1983 presidential elections which he lost. He always claimed that the elections were rigged, a claim which could not be controverted. But Chief Awolowo’s seemingly unbending position on national issues and his apparent inability to win to his side prominent politicians from other parts of the country was his major undoing.

Chief Awolowo advocated in his Path to Nigeria Freedom (1947) for a federation in which the linguistic groups would be the constituent units. This should not be a surprise as he was a co-founder and Secretary General of the “Egbe Omo Oduduwa”, a Yoruba cultural organization which later transformed into the Action Group.

In recognition of his immense contributions to the development of the country, Chief Awolowo was conferred with Nigeria’s highest honour of Grand Commander of the Federal Republic (GCFR) in 1980.

After his death on 9th May, 1987, the Federal Government changed the name of the University of Ife to Obafemi Awolowo University, a university which his party established in 1962. But more importantly, his programme of free education is a legacy that successive governments in the South – Western part of Nigeria continue to build upon.

As humorously pointed out by Chief Odumegwu Ojukwu, Chief Awolowo was the best President Nigeria never had. This is not far from the truth. Politicians, especially from the south-west now claim to belong to the Awo political dynasty to win elections.

It continues to remain a puzzle and an irony of life how a towering figure like Chief Obafemi Awolowo reputed for his organisational acumen and skills, and who was once described by a former British Prime Minister as competent enough to be a Prime Minister in Britain could not win a national election in Nigeria.

Use The Download Button Below...
TOPICS:Biography of Chief Jeremiah Obafemi Awolowo