Advantages and Disadvantages of Multi-Party System 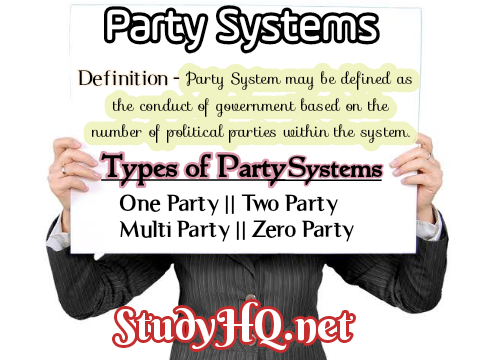 Multi Party System is defined as a system with more than two political parties are contesting for political power in a country. All the parties are duly registered and recognised by law. In multi-party system, a coalition government may be formed, if no party had absolute majority seats in parliamentary election.

There are certain advantages of multi-partyism.

The election of Aminu Tambuwal e.g. The speaker of the Nigerian House of Representatives in June 2012 contrary to the directive of the PDP leadership attests to this.

Multi-party system is disadvantageous in the following ways;

In Nigeria’s First Republic, for example, none of the three major parties was dominant as each of them won only in their respective regions. That is, the Northern People’s Congress (NPC) won in the North, the National Convention of Nigerian Citizens (NCNC) in the East and the Action Group (AG) in the West.

A similar pattern played out itself in the Second Republic. The National Party of Nigeria (NPN), which was the ruling party, did not have a majority in the National Assembly and had to work out in accord with the Nigeria People’s Party (NPP) to have its bills passed.

The party also had only seven of the nineteen governors in the 1979 elections. The PDP has, however, been dominant in the Fourth Republic, not because the party in providing good governance but as a result of poor organisation and the inability of the other parties to overcome their organisational weaknesses and present a formidable opposition to the PDP.

Related Topic ~  The Structure of Military Government In Nigeria

The coalition government which is the hallmark of the multi-party system is notoriously unstable. Italy provides a good example. Italian governments, for instance, last on the average for nine months but the collapse of one government is usually followed after a short period by a government almost identical to the government whose fall led to the crises.

In February 1970, for example, a government collapsed and after two months of caretaker government and intense bargaining, the same prime minister and the same parties were able to form a “new government”, which lasted for just three months.

In Israel, the Labour government of Ehud Barak, after only two years in office, was defeated by Ariel Sharon of the Likud Party in 2000 over whether or not to negotiate with the Palestinian Liberation Authority on the creation of the state of Palestine whose capital will be in East Jerusalem.

This practice gives the small parties and their leaders a disproportionate share of power, which may be used primarily for selfish ends.