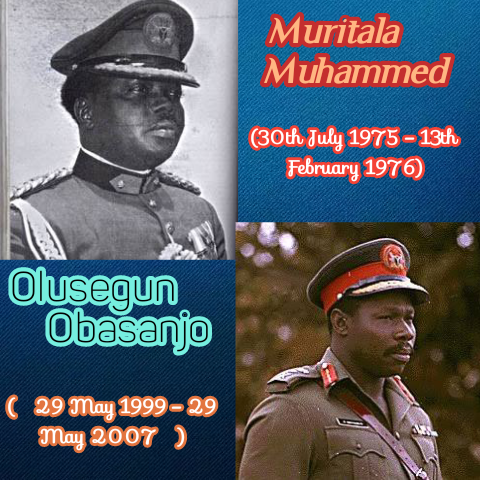 The information above are basically what we found on Murtala Muhammed & Olusegun Obasanjo Wikipedia official page as at times of publishing this article. We’re not responsible for any further changes made in future.

The third successful military coup in Nigeria was staged on 29th July, 1975 and Brigadier (later General) Murtala Muhammed emerged as the new Head of State and Commander-in-Chief of the Armed Forces.

The new helmsman was one of the architects of the July 1966 military coup, and a key member of the Yakubu Gowon government which he served variously as General Officer Commanding (GOC), First Division of the Nigerian Army during the war and later as Minister of Communications.

It was not clear why and when things fell apart between Yakubu Gowon and Murtala Muhammed, but it would appear that the following factors contributed to the collapse of the Gowon regime.

The high level of corruption in the top military hierarchy. For instance, 10 out of the 12 state military sacked by the new regime in 1975 governors were adjudged guilty of corruption by the new government. The two men cleared of corrupted charges were Brigadier Mobolaji Johnson (Lagos State) and Brigadier Oluwole Rotimi (Western State).

The short-lived administration of General Murtala Mohammed was action-packed. Immediately after seizing power in 1975, the Murtala government announced a new transition programme that would lead to the transfer of power to civilians on October 1st, 1979.

The Federal Military Government also created 7 more states on 31st February, 1976 and announced the creation of a new federal capital at Abuja.

The regime also tackled the issue of corruption headlong as more than 10,000 civil servants were dismissed or retired from the public service for acts ranging from corruption to declining productivity.

Price control measures were also introduced to check the galloping inflation in the country, and for the first time, Nigeria articulated a genuinely non-aligned position on major foreign policy issues.

The new Head of State was popular at home and abroad, but those who were benefiting from the decadent and corrupt economic system of the past were not amused. 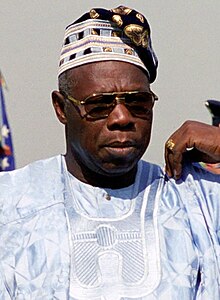 Following the assassination of General Murtala Mohammed, the head of state, Brigadier Olusegun Obasanjo (later General), the Chief of Staff Supreme Headquarters was immediately sworn in as the new Head of State and Commander-in-Chief of the Armed Forces.

Lt Colonel Umar Musa Yar’Adua (later Major General) also emerged as the new Chief of Staff Supreme Headquarters. The elevation of Musa YarAdua to the highly exalted office of the second-in-command in the military government was a balancing act to appease the Hausa/Fulani which produced Murtala Mohammed.

Major General Musa Yar’Adua was also an Hausa-Fulani from Katsina, a neighbouring state to Murtala’s Kano. This marked the formal introduction of the federal character principle in the allocation of public offices.

The government faithfully implemented all the programmes previously enunciated by General Murtala and successfully handed over power to civilians on 1st October, 1979.

The structure of the Murtala/Obasanjo regime was similar to those of Aguiyi Ironsi and Yakubu Gowon military governments. The Supreme Military Council was the highest decision-making organ of government and the National Executive Council performed purely executive functions. A new body was however, added to these organs, namely, the National Council of States – the body was created in 1976.

Operating under the chairmanship of the Head of State, the National Council of States comprised mainly state military governors. The body coordinated the legislative and executive matters affecting the whole country. Each state had a State Executive Council and the military governor was the chief executive of a state.

Unlike previous arrangements state military governors were excluded from membership of the Supreme Military Council. They reported to the Chief of Staff, Supreme Headquarters who was the de-facto vice president of the country.

Military governors under this dispensation were middle-level officers such as Colonel or Lieutenant Colonel or their equivalent in the Navy and Air Force whereas top military officers were appointed as governors in previous regions.

In terms of decisiveness, discipline, commitment to set goals and genuine concern for the advancement of national interest, the Murtala, Obasanjo regime was most effective.