The information above are basically what we found on Sanni Abacha Wikipedia official page as at times of publishing this article. We’re not responsible for any further changes made in future. 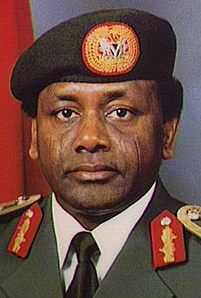 The write-up below only explain in details the military administrations of Sanni Abacha. We don’t published any information regarding Abacha early life before his military regime, neither do we write any information after his dismissed from office.

The Interim National Government was sacked by General Sani Abacha on 17th November, 1993 and, as expected, General Abacha Sanni quickly installed himself as the new Head of State.

The structure of the Abacha government was similar to the Babangida’s in many respects. The Supreme Military Council was redesignated as the Provisional Ruling Council (PRC), perhaps to give the impression of the transient nature of the government. The Head of State was the head of the PRC. The other two bodies were the National Executive Council and the National Council of States.

The Abacha government adopted a hard line posture in dealing with national issues and its political opponents. It probably had the worst human rights record in the political history of Nigeria. The regime did not waste time in clamping down on groups perceived to be opposed to the government.

For instance, Chief M.K.O. Abiola, who declared himself president after returning from self exile in 1993 was quickly arrested and detained. He eventually died in detention. Leading members of the outlawed National Democratic Coalition (NADECO) which agitated for immediate return to civil rule were arrested and some of them including Chief Alfred Rewane were assassinated.

The lucky ones such as Professors Wole Soyinka and Bolaji Akinyemi had to run into exile to save their lives, Retired Major General Shehu Musa Yar’Adua who participated actively in the 1995 Constitutional Conference was arrested for calling for a quick return to civil rule and he never came out of detention untill later date.

Mr. Ken Sam Wiwa, a leading human rights activist and eight other Ogoni activists were arrested, tried, convicted and hanged despite calls for clemency from within and outside Nigeria. The hanging of Ken Saro Wiwa and others actually took place during the 1995 Commonwealth Conference in Auckland, New Zealand and the body immediately suspended Nigeria from its membership.

Even women were not spared. Mrs. Kudirat Abiola was killed in Lagos just because she called for the release of her husband and the de-annulment of the 1993 presidential elections widely believed to have been won by Chief M. K. O. Abiola. The assassins were suspected to be state agents.

The Abacha government claimed that it foiled two military coups organized against it in 1995 and 1997 respectively. Many critics of the government doubted the authenticity of these claims but the government did not fail to deal decisively with all those who were implicated in the coups.

In the second coup, General Oladipo Diya, the Chief of General Staff and several other Generals were sentenced to death. The sudden death of General Sani Abacha on 8th June, 1998 saved them from imminent execution.

The Sanni Abacha government could be credited with the following: