Government As An Institution Of The State

Thus, when the word ‘government’ is used in this post, it should be remembered that reference is being made to set of institutions whose responsibilitity is to regulate public affairs. What then is an institution? 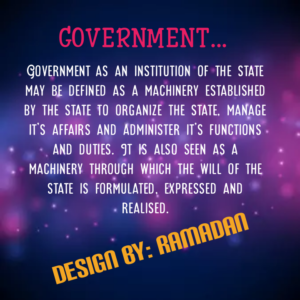 stitution Of The State

What is Government as an Institution of the State?

Government as an institution of the state may be defined as a machinery established by the state to organize the state, manage it’s affairs and administer it’s functions and duties. It is also seen as a machinery through which the will of the state is formulated, expressed and realised.

The fundamental function of any state therefore, is to come up with dynamic policy, to control people by the administration of Justice so that the weak are protected from the strong  and the poor from the wealthy. Therefore, the need to have a body capable of regulating their daily activities arises.

An institution therefore refers to an organisation which is more or less permanent in nature. It is supported by the norms and values of the society to ensure it’s continuity. A distinction can be made here between institution and organisation.

Unlike an institution, the organization is less permanent and less deeply rooted in society. The Nigeria Airways, a government organization was, for example, liquidated in 2003. Some other government owned companies like the Nigeria National Supply Company (NNSC) also collapse long ago.

Thus, while organisations such as the Nigeria Airways or the NNSC may be abolished or have it’s name changed (e.g. the Power Holding Company of Nigeria {PHCN} was formerly the Electricity Corporation of Nigeria and later National Electric Power Authority), no such a thing may happen to an institution like the civil service or the police. It is unimaginable, for instance that a government institution like the police or civil service can be dissolved.

Government is the most important institution of the state and government itself is made up of several institution including the executive, legislature and the judiciary.

Government, as the most important institution of the state, coordinates the other state institutions such as political parties and electoral commissions. The government performs this coordinating functions to maintain law and order in the state.

A government can perform this role because it controls institutions like the military, the police, the courts and the prison. Government is therefore an institution which has the monopoly of the means of violence and which, at the same time, attempts, though sometimes unsuccessfully, to keep a monopoly of the use of the force.

What distinguish a government from any other organizations or group in society therefore is it’s power to legitimately make laws and enforce them.

An organization like the Boy’s Scout, for example, may make it’s own rules and punish members who break these rules, but it cannot arrest, detain or jail it’s members. It is only government that can do these things because of its coercive powers.

Another aspect of government’s coordinating function is that government determines who should participate in other institutions. For example, the government decides who is a citizen, soldier, policeman, civil servant or legislator. The Babangida Military Regime (1985 – 1993), for example, banned what is called ‘old-breed’ politicians from participating in it’s transition to civil rule programme.

Although the old politicians were ostensibly banned because of their alleged sordid role in the collapse of the First and Second Republic, it would appear, however, that the Babangida Regime which was not too keen on relinquishing power might have considered the more experienced and tested politicians more difficult to deal with than the largely inexperienced and young politicians.

Not surprising, the regime had a field day in the conduct of the transitional elections. It changed the rules of the game several times, banned and unbanned politicians at will, changed the leadership of the electoral commission when it suited it and ultimately annulled the June 13, 1993 elections with little or no resistance from the largely untested and weak politicians.

Government may therefore be defined as a set of political institutions whose function is to regulate the affairs of the people in a state. The three major institutions of government are the legislature, the executive and the judiciary. The legislature makes the law, the executive enforces the law and the judiciary interprets the law and punishes offenders.

Government as the Executive

The government in Nigeria between 1999 and 2007 was the government under the leadership of former President Olusegun Obasanjo which was elected on the platform of the Peoples Democratic Party (PDP) in 1999 and 2003 respectively. Some of the decisions which the government took or did not take had effects on the citizens of the country.

The reform of the telecommunication sector, for example, has made telephones much more accessible to Nigerians and opened up employment opportunities for millions of Nigerians. Decision making is therefore part of the work of government.

The president, or the executive, at more general level, is held responsible for the success or failure of government policies and decisions. Sometimes, people even forget that the legislature and the judiciary are part of the government.

When it is announced, for example, that the government of Nigeria has congratulated George Bush on his election as the President of the United States of America, or has sent an ambassador to a foreign country, government here refers to the executive branch of government.

In the presidential system of government (as we have in Nigeria today), government refers to the President and his executive council, whereas in the parliamentary system of government, it is the Prime Minister and his cabinet. The cabinet or executive at the center of things in all countries is commonly referred to as the government. The members of the executive (the President or Prime Minister and his ministers) are the people who have the greatest influence on the most important decisions.

Related Topic ~  Difference Between Checks and Balances And Separation of Powers

It is important to emphasize that the term ‘Administration’ is usually used in place of government in the United States (USA). There is, for instance, an Obama Administration {i.e the government of President Barack Obama}. Similarly, it is possible to talk about a Jonathan Administration in Nigeria.

It is not clear when the first government was established. What is certain, however, is that government is an old as the human society. When people began to live together great, certain decisions had to be taken to settle disputes and conflicts and ensure peace and harmony in the community.

Each community has structures, which take binding decisions and resolve conflicts. This body is often known as the government. In the old Oyo Empire, for example, the Alafin and the Oyomesi (council of chiefs) formed the government. The absence of such a structure may bring confusion or disorder to the community.

The purpose of the structure is to ensure that the channels of command and control are clear to the extent that confusion about who does what is reduced or eliminated.

Thus, government may be seen as a group of people who ensure peaceful coexistence among the citizens and see to it that people do not do what please them. Government is therefore essential to settle disputes by making decisions, which are legally binding. The government usually achieves this objective through a process of negotiation and conciliation.

Government is therefore essential in a modern state to make and enforce laws and settle disputes. A state that is unable to settle disputes and maintain peaceful coexistence among it’s members ends up in anarchy.

In maintaining public order, the police may, for example, grant permit for a peaceful demonstration and deny permit to any group, which wants to assemble for illegal purposes. Under the Public Order Act (Cap 382) of 1990, for example, the police can prohibit meetings, rallies and processing in public places in Nigeria. The police, for example, relied on this Act to prevent the opposition parties from demostrating in Abuja against the conduct of 2003 elections.

The Federal High Court, Abuja, However, declared the Act as unconstitutional in July 2005. The general insecurity in the country with rampart cases of armed robbery, kidnapping, sectarian conflicts and bombing obviously calls to question the capacity of government to maintain law and order in the country.

Second, it may provide an enabling environment for local and foreign investment through improvement in electricity water, power and energy supply, transportation, communication and security.

The provisions of these facilities not only enhances the living standards of the people but also promotes socio-economic development in the country. Rural/urban migration in Nigeria, for example, may be reduced if these basic amenities are provided for rural dwellers.

She also has to maintain friendly relations with other countries where Nigeria has interests. Before the Nigerian Civil War (1967 – 70), Nigeria maintained fraternal relations with mainly Western countries, but the failure of some of these countries to support the country’s war efforts altered Nigeria’s foreign policy objectives and drove the country, into the warm embrace of War saw act countries like the former USSR, Poland, Czechosalovakia, Romania etc which actively assisted the federal side during the war.

Criticism of Government as an Institution of the State

The major criticisms of the definition of government as an institution are fairly obvious.

TOPICS:Government As An Institution Of The State