Francoism – Authoritarian political regime that took place in Spain towards the middle of the 20th century.

What was the Franco Regime?

The Franco regime was an authoritarian political regime that took place in Spain towards the middle of the 20th century. Its leader, General Francisco Franco, came to power after the end of the Spanish civil war in 1939, and remained at the head of state until his death in 1975.

The ideology that supported the dictatorship exercised by Franco is also known as Francoism. This ideology was Nationalist, Conservative, Catholic and anti-communist.

Origin of the Franco Regime

Francisco Franco Bahamonde was born on December 4, 1892 in the city of Ferrol, Galicia.

At the age of 15, he entered the Military Academy of Toledo. When he graduated, he participated in the Rif War (1911-1927), in North Africa. In 1926 he was promoted to brigadier general and two years later he was appointed director general of the General Military Academy, a position he held until 1931. In 1935 he became chief of the Central General Staff, and the following year he was assigned to the Commandery of the islands. Canary Islands.

With conservative ideas, Franco valued order, discipline and authority. He distrusted democracy, the parliamentary regime and liberalism, which he believed caused the decline of Spain in the 20th century.

On July 18, 1936, Franco joined the conspiracy led by various military leaders to rise up against the Second Spanish Republic, established in 1931. The failure of the coup d’état led to the start of the civil war. On October 1, his comrades in arms elected him the political and military leader of the rebel side.

Related Topic ~  Features of the 1963 Republican Constitution In Nigeria

The triumph in the civil war, with the military help of Nazi Germany and Fascist Italy, allowed Franco access to power in 1939.

Parade held in the Plaza Mayor of Salamanca to celebrate the taking of the city of Gijón by Franco’s troops in 1937, during the Spanish civil war.

Features of the Franco Regime

The main characteristics of the Franco regime were the following:

Historians usually divide the historical period during which Franco was in power into five stages.

They were years of great poverty, since the country was devastated after the civil war. Although Spain remained neutral during World War II, when Adolf Hitler invaded the Soviet Union in 1941, Franco sent the Blue Division, which was made up of 18,000 volunteers, to the eastern front to support him.

During this stage the regime adopted characteristics typical of fascism: creation of a single party, holding mass public acts, cult of the leader’s personality, use of profuse symbols (the fascist salute, the yoke and arrows), among others.

Characterized by international isolationism and economic autarky. Due to the support given to Adolf Hitler and Benito Mussolini, Spain was excluded from the United Nations (UN), created in 1945, and from the economic aid provided through the Marshall Plan.

It marked the end of external isolation due to the start of the Cold War, which favored Spain, since it placed it within the bloc of anti-communist countries. The alliance with the United States also favored a gradual opening of the national economy. In 1955, Spain was admitted to the United Nations, which opened the doors to economic development and foreign tourism.

Marked by an economic development, during which the middle class raised their income and improved their life status. At the same time, the first opposition demonstrations began to emerge, led by workers and students.

It was the period of agony of the Franco regime. Protests and strikes increased, and political opposition grew stronger as Franco’s health deteriorated and the economy went into crisis due to rising oil prices. 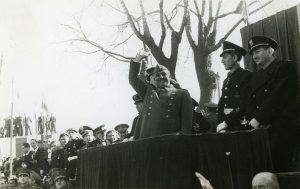 Franco’s visit to the city of Barcelona in 1942.

Consequences of the Franco Regime

The main consequences of the exercise of power by the Franco regime were the following: 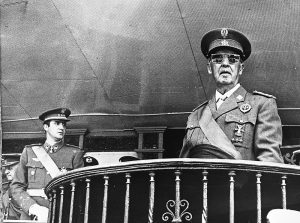 The End of Franco Regime

Franco died in Madrid of natural death, on November 20, 1975. His remains were buried in El Valle de los Caídos, in the Sierra de Guadarrama. They remained there until 2019, when the government of the socialist Pedro Sánchez promoted the exhumation of his remains and their transfer to a family cemetery.