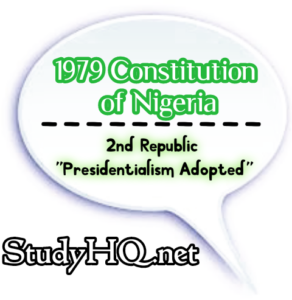 The main features of the 1979 2nd republican constitution included the following:

In order to achieve this objective, the constitution contained some unique and explicit provisions which, on their own, constituted an important mandate for future democratic goals.

For example, Article 15 prohibited “discrimination on the ground of place of origin, sex, religion, status, ethnic or linguistic association or ties”. The constitution further provided that the composition of the Federal government and its various agencies must reflect the “federal character of Nigeria and the need to promote national unity” Article 14 (3).

In other words, in making appointment to every position in the civil service, the federal character principle should be adhered to. For example, the President was required to appoint at least one of his ministers from each state of the federation.

Perhaps, the most important innovation of the 1979 Constitution was the introduction of the presidential system of government in replacement of the parliamentary system of the First Republic. The choice of this system should not be a surprise since the military government had never hidden Its preference for it.

In the words of Gen. Murtala Muhammed at the inauguration of the Constitution Drafting Committee in October 1975, the presidential system provided “a clear focal point of loyalty, which is indispensable to national integration”.

Under the system, the President was the Head of State, Head of Government and Commander-in-Chief of the Armed Forces. To be eligible for election as President, the candidate must be a Nigerian citizen by birth and at least 35 years old.

To be declared as winner of a presidential election, the candidate must win a simple majority of the votes cast at the election and at least one quarter of the votes cast in each of at least two thirds of all the states of the federation.

The Constitution made provision for a National Assembly, which was bicameral as in the 1963 Republican Constitution. But unlike the previous constitutions, the Senate under the 1979 Constitution comprised 96 members with five elected from each state of the federation and one from the Federal Capital Territory, Abuja.

Moreover, a candidate for election to the Senate must be at least 30 years old. The Senate elected one of its members as President of the Senate.

Members of the National Assembly were elected for a term of four years but there was no limit to the number of terms legislators could serve.

The major function of the National Assembly was law-making. Unlike in the First Republic when a bill could only originate from the House of Representatives, any of the two houses could initiate a bill on any subject. But the President had to assent to the law to be effective.

The 1979 Constitution made provision for the judiciary which was required to provide impartial adjudication. It was the only branch of government not elected.

The highest court of the land was the Supreme Court which consisted of the Chief Justice and 15 other Justices. The Chief Justice of the Federation was appointed by the President and the appointment must be ratified by the Senate.

In the same vein, the President appointed the other Justices of the apex court based on advice provided by the National Judicial Commission but no Senate confirmation was required for their appointment.

The Federal Court of Appeal was also created by the constitution. It was an intermediate appellate court, which determined cases from the lower courts. The court consisted of a President and 15 other Justices who, like the Justices of the Supreme Court, were appointed by the President on the recommendation of the Judicial Service Commission. The Federal Court of Appeal was also an innovation of the constitution.

Although the new federal structure was an improvement on the previous ones, the splitting of the regions into small component units led to a disproportionate increase in the powers of the central government.

Consequently, the power distribution tended to favour the Federal Government considerably as the exclusive legislative list became longer while most of the functions which used to be in the concurrent list had been transferred to the centre.

More importantly, the residual list of State powers had disappeared from the constitution.

The constitution contained a cumbersome and difficult procedure for State creation. Under Section 8 of the constitution, the first step in the process of creating a new state was that there should be a formal request from the area demanding a new state and the request must be supported by two-thirds of the elected members of the people of the area demanding the state in the Senate, House of Representatives, the State House of Assembly and the local governments.

Secondly, the proposal for the creation of a new state must be approved in at referendum by at least two-thirds majority of the people of the area who made the demand for a new state. Thirdly, the request must be supported by a simple majority of all the states of the federation and the State Houses of Assembly Finally, the proposal must be supported by two-thirds majority of the members of the Senate and the House of Representatives.

These strict conditions made it almost impossible to create new states in the country.

Moreover, the distribution of offices in the party must reflect the federal character of Nigeria. The constitution also required political parties to submit their accounts to the Federal Electoral Commission (FEDECO), and must not receive foreign financial assistance.

The use or maintenance of thugs was outlawed by the constitution.

The Fundamental Objectives and Directive Principles of State Policy was a novel provision in the constitution. These fundamental objectives and directive principles were broad social and economic goals to which the government was required to direct its energy.

But unlike fundamental rights which are automatic rights and enforceable at law, these fundamental objectives and directive principles of state policy (e.g. right to free medical care or free education) have been declared to be long-term objectives which cannot be enforced in a court of law.

You cannot, for example, go to court to compel government to give you free education. As such, these objectives could not be enforced in the court nor were they binding on the government.

It has been argued that these objectives were derived from the national objectives embodied in the Second National Development Plan (1970 – 1974). The plan objectives included the following”.

(i) To establish Nigeria as a united, strong and self-reliant nation.

(ii) To create a great and dynamic economy.

(iii) To establish an egalitarian society.

(iv) To create a land of full opportunities for all citizens.

(v) To work towards the establishment of a democratic society.

Nigeria would have been a great country flowing with milk and honey if these objectives had been achieved.

The Fifth Schedule to the 1979 Constitution stipulated a code of conduct for public officers. This was meant to ensure some degree of accountability and probity in top government officials. For example, the President, Vice President, Governors, Ministers, Commissioners and Legislators were prohibited by the constitution from keeping foreign accounts.

Moreover, public officers were precluded from engaging or participating in the management or running of any private business, profession or trade. The constitution also established the Public Complaints Commission to which grievances against public officers could be made.

These provisions were designed to minimize possibilities of conflict of interest, greed and corruption in the public service. The constitution also provided for the establishment of a Code of Conduct Tribunal to enforce compliance with the law.

It also provided financial guarantees for the local governments through statutory allocation of public revenue by the National Assembly and the State Houses of Assembly.

Unlike the situation in the First Repuplic, the state governments could no longer abolish local governments nor could they encroach on their functions.

The structure of the governments of the states was similar to that of the central government. Thus, a state executive comprised the Governor, Deputy Governor and Commissioners who were federal equivalent of the President, Vice President and Ministers respectively.

Use The Download Button Below...
TOPICS:Main Features Of 1979 2nd Republican Constitution Of Nigeria