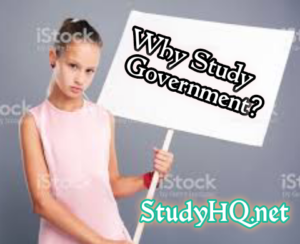 Definition of Government
Government, as the most important institution of the state, coordinates the other state institutions such as political parties and electoral commissions. The government performs this coordinating functions to maintain law and order in the state.

A government can perform this role because it controls institutions like the military, the police, the courts and the prison. Government is therefore an institution which has the monopoly of the means of violence and which, at the same time, attempts, though sometimes unsuccessfully, to keep a monopoly of the use of the force.

What distinguish a government from any other organizations or group in society therefore is it’s power to legitimately make laws and enforce them.

An organization like the Boy’s Scout, for example, may make it’s own rules and punish members who break these rules, but it cannot arrest, detain or jail it’s members. It is only government that can do these things because of its coercive powers.

Another aspect of government’s coordinating function is that government determines who should participate in other institutions. For example, the government decides who is a citizen, soldier, policeman, civil servant or legislator.

The Babangida Military Regime (1985 – 1993) in Nigeria, for example, banned what is called ‘old-breed’ politicians from participating in it’s transition to civil rule programme. Although the old politicians we’re ostensibly banned because of their alleged sordid role in the collapse of the First and Second Republic, it would appear, however, that the Babangida Regime which was not too keen on relinquishing power might have considered the more experienced and tested politicians more difficult to deal with than the largely inexperienced and young politicians.

Related Topic ~  Features of the Presidential System of Government

Not surprising, the regime had a field day in the conduct of the transitional elections. It changed the rules of the game several times, banned and unbanned politicians at will, changed the leadership of the electoral commission when it suited it and ultimately annulled the June 13, 1993 elections with little or no resistance from the largely untested and weak politicians.

Government may therefore be defined as a set of political institutions whose function is to regulate the affairs of the people in a state. The three major institutions of government are the legislature, the executive and the judiciary. The legislature makes the law, the executive enforces the law and the judiciary interprets the law and punishes offenders.

After this, a students of Government may not find it difficult to answer the question: why study Government? Nevertheless, the study of Government is important for the following reasons.

2 Comments on "Why Study Government? – Importance Of Studying Government"