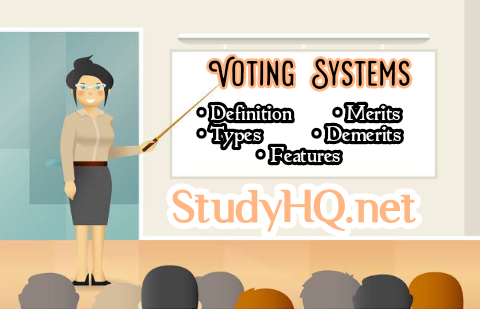 The simple majority means that the candidate with the largest number of votes wins the election. For example, five candidates (A, B, C, D and E) contested election in a federal constituency. Their respective votes are as follows.

In the above table, candidate C with 70,000 votes win the election by a simple majority. In this example, Candidate C is elected even though his total votes represent less than 50% of the total votes which are 90,000.

The simple majority electoral system of voting has the following features.

The single-member constituencies or district system has certain advantages. First, simple and easy to understand. Second, it enables the voter to know the candidate he is voting for. Third, it allows the representation of minorities. Finally, it provides for a stable government.

Its disadvantages include the following: first, the small size of the district may allow the government to manipulate elections to its own advantage; second, the majority party, through a process of gerrymandering, may redraw the boundaries of the constituencies; third, it leads to the election of people who regard themselves as representing local rather than national interest and finally, inadequate attention may be given to the Redesign of constituencies, a neglect that continues the dominance of a sectional or economic interest which may have ceased to be a majority.

The advantages of the simple majority are similar to those of the single-member constituencies itemized above.

The simple majority has the following disadvantages.

Use The Download Button Below...
TOPICS:Advantages and Disadvantages of Simple Majority Voting System