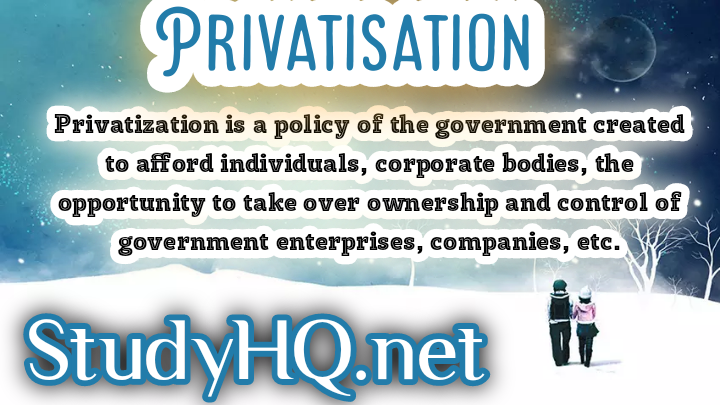 Privatisation is a policy of the government created to afford individuals, corporate bodies, the opportunity to take over ownership and control of government enterprises, companies, etc.

Aims and Objectives of Privatization

The objectives of privatization include the following.

A major objective of privatization is to improve economic performance. That is, privatization aims at increasing the efficiency of public corporations. It leads to better utilization of human and material resources with the aim of making profits.

Another objective of privatization is to raise revenue. By selling these enterprises, the government makes a lot of money. In fact, a major reason for the privatization of public corporations is to generate revenue. Consideration of revenue often leads to hasty privatization or deregulation.

Governments sometimes sell public corporations in order to resolve persistent problems of management and control. One major problem of state-owned companies is weak management and this problem can be overcome by selling the corporation. But this is like throwing away the baby with the bath water.

And there is not much empirical evidence to show that the private sector, especially in Nigeria, is superior to the public sector in terms of management.

Government sometimes privatize public corporations in order to deal with trade. unions especially, if it is perceived that the unions are becoming too powerful. Governments generally do not like trade unions, which dictate to them. In other words, an unstated objective of privatization is to reduce the power of trade.

In a free market economy, the consumer is the king, but in the public sector consumers are not seen in the same way. There is poor service delivery and consumers have little or no choice. The purpose of privatization is to provide goods and services for public consumption and to re-establish the sovereignty of consumers.

A major objective of privatization is to promote popular capitalism. Capitalism is an economic system in which goods and services are produced mainly by private individuals and companies. The establishment of public corporations puts, resources in the hands of public officials but this negates the principles of capitalism.

Use The Download Button Below...
TOPICS:Advantages and Disadvantages Privatisation

Be the first to comment on "Privatisation: Definition, Reasons, Merits & Demerits"