Authority is usually confused with power but they mean different things.

Authority is recognition of the right to rule regardless of who the ruler is. Unlike power, which to a large extent involves the use of force, authority is a light to rule. As such, a person is said to have authority if his rule is accepted by the people without question. 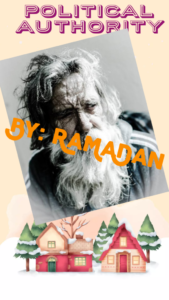 A number of examples will clearly illustrate the meaning of this concept. For example, a child is under the authority of his parents; a teacher has authority over his students; a religious leader has spiritual control over the flock and a government can issue orders and commands and receive obedience from the people.

A person with authority is often inbued with power. But a person that has no power may be unable to exercise authority over others. Power and Authority therefore inextricably  intertwined.

According to Max Weber, a German sociologist, there are three main sources of authority in a modern state. They are; tradition, charisma and legal rules.

Traditional authority is the right to rule which arises from tradition or the continuous exercise of power. It is based on the Divine Right of Kings. That is, the traditional ruler is obeyed because of the belief that the king is chosen by divine authority and obedience to him his obedience to the god’s laws.

For example, in the pre-colonial Yoruba Kingdom, the Oba (king) was regarded as “Igbakeji Orisa (Second in Command to God)“. In the Fulani Emirates, the emir was the spiritual and political head of the emirate. go to the authority of this traditional institutions has been severely eroded in modern times, they will exert a great deal of influence on the political direction of their local communities and the country at large.

Traditional authority has often been criticized as absolete, unprogressive and undemocratic. However, it remains an enduring source of authority which governments in developing countries often used to mobilize the people in support of their programmes.

Charismatic authority is the right to rule which emanates from the exceptional personal qualities of an individual. The personal attributes of an individual which may endear him to the public include beauty, charm, intelligence, bravery and oratory skills.

For example, Martin Luther King, the late African-American civil rights activist was able to capture the minds of several million people at his last rally in Memphis, USA in 1968 with his often quoted aphorism: “I have a dream”.

The problem with this kind of activity is that it is not transferable.

For example, the police officer is obeyed largely because he is an agent of the State. The Taxman is hated everywhere because people generally do not like paying taxes but the taxpayers still has to cooperate with him because the tax man is only carry out a data assigned to him by higher state authorities.

A former government is for instance generally less influential than the incumbent primarily because the source of authority of the former has dried up.

In politics, this kind of authority based on laws and which is impersonal is known as political authority and it is the one that is of utmost importance to the student of Government.

Relationship Between The Sources of Authority

It is important to emphasize, however, that none of the three source of authority can stand on its own. That is usually a combination of two or more or less authorities at any given time.

A person who is able to combine the three forms of authority is said to be very powerful. This partly explains the desire for traditional chieftaincy titles or honorary degrees by members of the Nigerian political class.