Otomí: History of the Otomies

Who are the Otomi?

The Otomi are Mexican indigenous people who, due to coexistence in the same regions over the centuries, share traits of material culture with the Nahuas.

At the time of the arrival of the Spanish to Mexico, in the 16th century, the Otomi lived in village communities and in neighborhoods of the cities of the political-military confederations that disputed control of the territory of Central Mexico: the Triple Alliance, the Tlaxcala confederation and the Tarascan State.

Location of the Otomi

It is considered that the place of origin of the Otomí peoples, in pre-Hispanic times, was the northwest of the Mexican Central Highlands, since in that area it is possible to trace various peoples with languages ​​related to Otomí. From this region, where they lived for millennia, migrations to other areas would have occurred since the end of the pre-Hispanic period.

Today, the Otomi occupy various areas of central Mexico. They settle especially in the Valle del Mezquital, in the State of Hidalgo. There are also more or less numerous Otomi communities in the States of Mexico, Querétaro and Veracruz.

Area of ​​origin of the Otomi and where the most numerous groups are concentrated today.

Characteristics of the Otomi

The main characteristics of the Otomi are the following:

Political and Social Organization of the Otomi

Political Organization of the Otomies

Social Organization of the Otomies

The social organization of the Otomi is based on the family, which, depending on the region, can be a nuclear family or an extended family. The family structure is patrilineal, meaning that the children live with the father’s family.

The work is divided by sex. The men take care of the crops, livestock, constructiom and community work, and the women carry out the housework, take care of the children and collaborate during the sowing and harvesting.

At present the Otomi practice the Catholic religion with aspects of syncretism in worship. They maintain beliefs linked to pre-Columbian religions.

The identification of Christian saints with original deities of pre-Hispanic cultures is common. Their original beliefs are also manifested in the propitiatory rituals of agricultural activities, in the cult of the dead and in medicine.

They are known four variants of the Otomi languages. They all have the same Ottoman linguistic roots, but they have been diversifying due to migrations. While two of them have numerous speakers, the other two are tending toward disappearance.

The Otomi, in general, adopt the clothing of the peasants of the region where they live. Older women tend to keep traditional clothing, which consists of an embroidered blouse and a shawl, the shawl, with which they cover their shoulders. 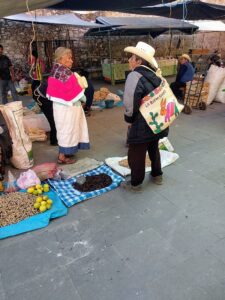 Otomí market on the border between Puebla and Hidalgo, Mexico.