What was the Mongol Empire?

The Mongol Empire was an imperial state of Central Asia, founded in 1206 by Genghis Khan, who managed to impose his authority over all Mongolian tribes.

It is the second largest empire in history, after the British Empire, as it covered some 24,000,000 km². It included the present territories of Mongolia, China, Korea, Iran, Iraq, Afghanistan, Kyrgyzstan, Uzbekistan, Turkmenistan Kazakhstan, and parts of Turkey and Russia. It stretched from the Danube River in Europe to the Korean (South & North) Peninsula in Asia.

The key to its rapid expansion were its sturdy horses and skilled and disciplined riders, who could ride while drawing bows and shooting arrows from 500 meters away.

The Mongol Empire disintegrated in 1368, due to difficulties in holding together such a vast territory, and internal conflicts and succession crises. 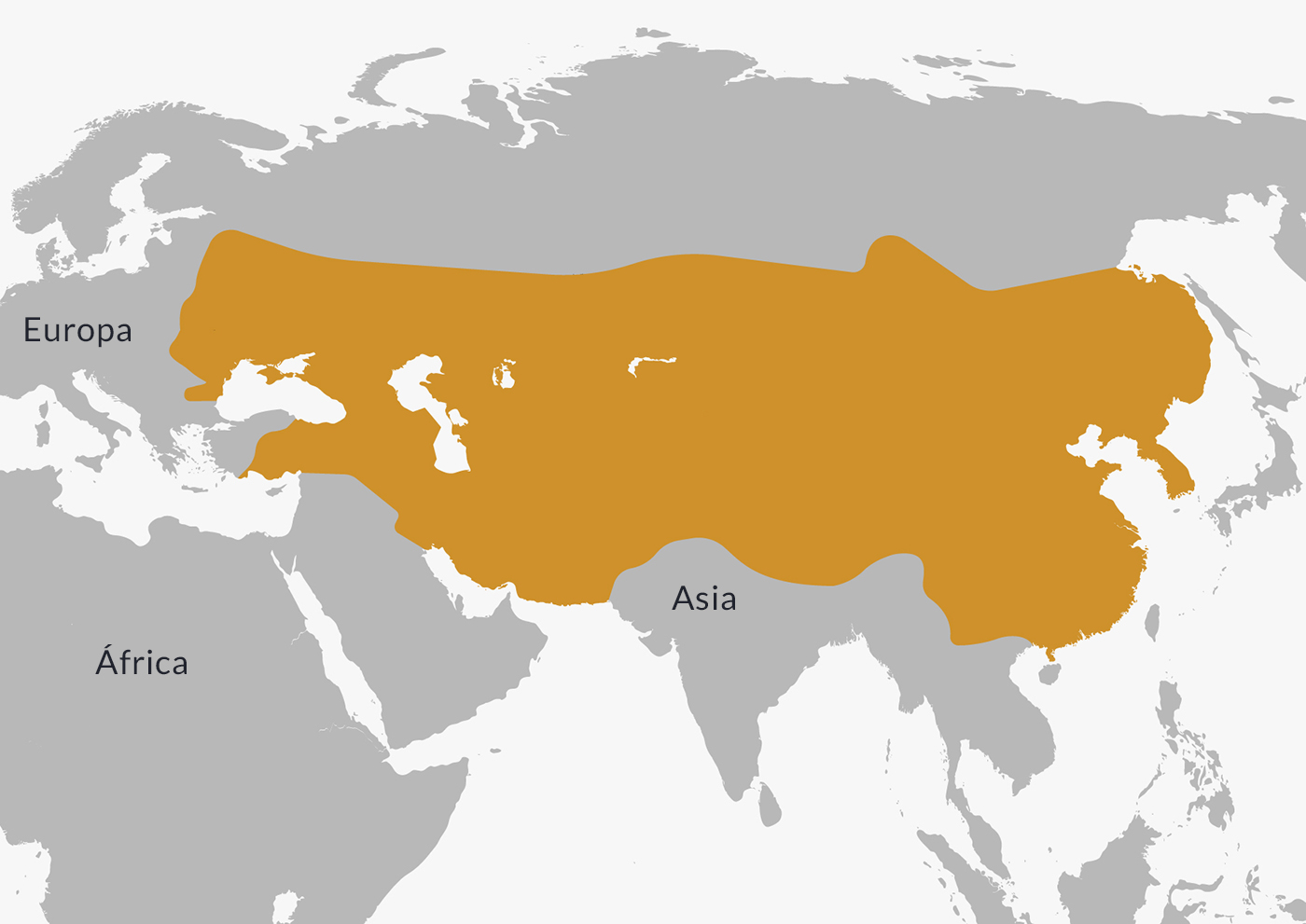 Maximum territorial extension reached by the Mongol Empire in 1279.

Political and Social Organization of the Mongol Empire

Political Organization of the Mongol Empire

The form of government of the Mongol Empire was the elective monarchy. The great Khan was elected by all the khans in an assembly called the Kurultai. The first great Khan was Temujin who, after his election, adopted the name Genghis Khan.

The officials of the empire were elected by the great khan based on criteria such as loyalty, courage and skill. Their positions were neither life-long nor hereditary since the emperor could fire them and even order their death when he deemed it necessary.

These officials were in charge of collecting taxes and tributes, recruiting soldiers, keeping posts supplied for imperial messengers, keeping a record of official activities, and establishing relations with neighboring governments.

In the early 13th century, the Mongols were nomadic horsemen who were grouped into clans. Each of them was led by a Khan or Chief.

Within each clan there were two types of people, the free and the servants. Among the free, there were social differences between ordinary men and women and those of aristocratic origin.

The Mongols based their coexistence on a code of laws called Yassa, which was written on scrolls. The code prohibited the kidnapping and sale of women and exempted doctors, religious leaders and gravediggers from paying taxes. Crimes such as cattle theft, deception and treason were punishable by death.

Economy of the Mongol Empire

At the beginning of the 13th century, the economy of the Mongol Empire was based on raising horses, herding goats and sheep, and hunting wild animals such as wild boars, deer, and rabbits.

Later, they began to produce cereals, silk and tea. They also began to use coins and paper money, which they used to buy carpets, spices, and precious stones from Arab, Indian, and Persian merchants, among others.

The Khans required foreign merchants to provide them with information about the cultures of neighboring peoples. In return, they were given credentials that protected them as they traveled through their domains.

This protection intensified land trade and relations between East and West, especially along the Silk Road, through which European missionaries and merchants, such as the Venetian Marco Polo, traveled.

Religions of the Mongol Empire

Originally, Mongols were animists, as they worshiped earth, sky, water, stones, and fire, and performed magical rituals. They also worshiped their ancestors, to whom they offered some of the prey they hunted in sacrifice.

From 1246 they adopted Tibetan Buddhism, which soon became their main religion. However, they tolerated other religions such as Christianity, Islam and Hinduism. A Mongolian saying said that: “All religions are like the fingers of the same hand“.

Dissolution of the Mongol Empire

In 1294, the Mongol Empire was divided into four states, they are; Yuan, which dominated China, Korea, and Mongolia; the Golden Horde, which controlled Southern Russia and Western Asia; the Ilkhanate, with its epicenter in Persia; and the Khanate of Chagatai, in Central Asia.

Of these states, the most extensive and powerful was the Yuan, of which the other 3 Khanates were nominally tributaries. The founder of the Yuan Empire was Kublai Khan, who in 1271 established his capital at Janbalic (present-day Beijing).

In 1368, the capture of this city by the Chinese forces of the Ming Dynasty marked the end of the dominance of the Mongols and their expulsion from China.

The main reasons why the Mongol Empire disintegrated are as follows:

Emperors of the Mongol Empire

The Mongol Empire was ruled by 6 emperors, who had the title of Great Khan: