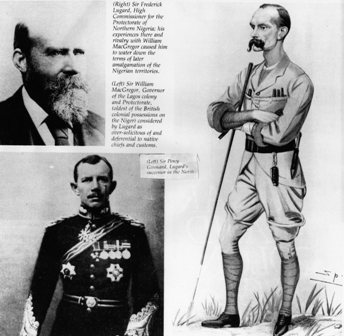 Background to the Constitution

In any discourse of the background to the Macpherson Constitution of 1951, it is important to revisit the problems of the Richards Constitution.

Second, the nationalists rejected the constitution on the ground that the composition of the unofficial majority was misleading. They claimed that most of the unofficial members were either chiefs appointed by government or nominees of the chiefs themselves.

The implication of the domination of the legislature by the unofficial majority was that government policies would always receive maximum support in the legislative house.

The most severe criticism of the constitution actually came from the NCNC, which was the only genuine national political party at the time. The party travelled throughout Nigeria and mobilized the people against the 1947 Richards Constitution. The tour brought politics to the doorstep of Nigerians and aroused their political consciousness.

As a result of the unpopularity of the constitution among Nigerians, especially among the nationalists, the NCNC sent a delegation to London in 1947 to demand for fundamental constitutional changes in Nigeria. The Secretary of State for the Colonies, Arthur Creech Jones, assured the delegation of the desire of the British Government to grant self-government to Nigeria, but cautioned that the Richards Constitution needed to be tried for some time before it could be reviewed.

Although the NCNC delegation did not receive the support of the British government for its demands, yet the agitation of the NCNC had significant consequences for the course of political development in Nigeria.

Thus, when Sir John Macpherson became the Governor of Nigeria in April 1948, he realized that there was loss of confidence in the government, and that the participation of the people in making a new constitution was imperative. He therefore promised to involve the Nigerian people in the making of another constitution for the country.

To achieve this objective, he set up a Select Committee of the central legislature to make recommendations as to the best way of reviewing the Richards Constitution. The committee comprising mainly the offlcial members of the house recommended that conferences should be held at village, district, provincial, regional and national levels to ascertain the wishes of Nigerians on the way forward.

The recommendations made at a particular level should be considered at the next higher level until the national level was reached.

The colonial government accepted the recommeridations of the committee and an elaborate machinery was put in motion to solicit the views of Nigerians on a new constitution. Debates were held to the national level on the new constitutional order.

The proposals of the General Conference were debated and approved by the Central Legislature. The Governor thereafter submitted the constitutional proposals to the Secretary of State for the Colonies for consideration. On 15th July, 1950 the Secretary of State approved the recommendations which later constituted the main provisions of the Macpherson Constitution of 1951.

Features of the MacPherson Constitution

The main features of the Macpherson Constitution included the following:

The Governor was the head of the central government in Lagos while the Lieutenant Governor took charge of the regional government.

A central legislature, called the House of Representatives, was established at the centre. The 149 member house comprised the following:

A Council of Ministers was established and it consisted of the Governor as president, 6 ex-officio members and 12 ministers (four from each region appointed by the Governor with the approval of the regional legislature). The council was a policy-making body.

A regional Executive Council (Council of Ministers) was established for each region. It advised the Lieutenant Governor on policy matters.

The Constitution established a Public Service Commission at the centre and, it had responsibility to advise the Governor on the appointment, promotion and discipline of staff in the public service.

The Constitution made provision for the setting up of a Revenue Allocation Commission. Consequently, the Governor established the Hicks Phillipson Commission in 1951 to make recommendations on the allocation of revenue between the different levels of government.

The commission eventually recommended the use of the triple principles of derivation, need and national interest.

Advantages & Disadvantages of MacPherson Constitution of 1951

Merits of MacPherson Constitution of 1951

The advantages of John Macpherson Constitution of 1951 in Nigeria are;

Demerits of MacPherson Constitution of 1951

The John Macpherson Constitution of 1951 in Nigeria has the following disadvantages:

Use The Download Button Below...
TOPICS:The John Macpherson Constitution of 1951 In Nigeria

Be the first to comment on "MacPherson Constitution of 1951 | Features, Merits & Demerits"