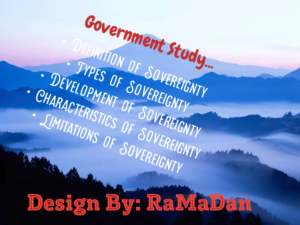 The word ‘sovereignty’ itself is derived from the Latin term ‘superamus’ which means supremacy. As such, Sovereignty refers to the supreme power or authority in a state. It is the power of the state to make laws, and enforce these laws without the state being subject to any foreign control.

Given this simple definition of sovereignty, every present day state may be considered as sovereign, but this is not really true in practice.

The one-sided distribution of power resources in international relations and the advent of globalisation have the negative effect of reducing the sovereignty of Nations, especially the weaker ones.

Limitations of Sovereignty of a State

The idea of sovereignty of the state exists more affection than in reality. The fact is that no state, regardless of its powers, can do whatever it likes because its sovereignty is limited in many ways.

International relations also imposes some limitations and state sovereignty. The reality is that no state can afford to live in isolation. Today, we live in a global village where whatever affects a country may likely affect the others.

For example, Hurricane Katrina which killed about 800 people and devastated parts of New Orleans USA in August 2005 triggered a sudden increase in the price of crude oil which hit an all-time high of 70 US Dollars a barrel and this invaluable affected the prices of petrol, diesel, kerosene and aviation fuel in many countries.

Another example is the Corona Virus (COVID-19) Pandemic Diseases that hit the global at large. COVID-19 affects different people in different ways. Most infected people will develop mild to moderate illness and recover without hospitalization. As at time of publishing this article, the deadly disease has over 26,857,439 confirmed cases with 880,069 death cases worldwide (September 5, 2020).

In addition, world opinion is now an important factor in world politics, and only few countries would relish the idea of being called a pariah state. Every government wants to get a favorable image for itself. Moreover, the non-recognition of a sovereign state amount to a brief limitation on its sovereignty.

In the modern era, membership of international institutions/organisation such as the United Nations, Africa Union and ECOWAS places considerable limitations on the authority of the State. These bodies take important decisions and issue orders, which are morally binding on member states.

The expulsion of Nigerian from the Commonwealth over its poor human rights record in 1995 and the consequent ostracization of the country by several international institutions, for example, help to accelerate the collapse of the Abacha Military Regime.

Some powerful international movements or ideas such as Pan-Africanism tend to blank states together to work for some common goals. Pan-Africanism, for instance was the dominant idea that influenced the formation of the defunct Organisation of African Unity ‘OAU‘ and its successor, the African Union which are supranational institutions.

Powerful pressure groups or associations exist in every modern state to influence government policies in the direction that are favorable to their members. These groups are usually consulted by government before any major legislation affecting them is passed.

For example, the Nigerian Labour Congress (NLC) is represented in several Federal Government strategic committees and institutions such as the Petroleum Products Pricing Regulatory Agency (PPPRA), the Palliative Committee and the National Political Reform Confluence of 2005.

Related Topic ~  Merits and Demerits of 1999 Constitution In Nigeria

Poor Nations which depend on which countries for material and financial assistance of often have their sovereignty severely undermine. This is primarily because strings or conditionalities are usually attached to the aids and loans granted to poor countries.

The annual budgets, of many poor and heavily indebted Third World countries usually receive input and endorsement from the international financial institutions and creditor nations before they are implemented.

Use The Download Button Below...
TOPICS:Limitations of Sovereignty of the State