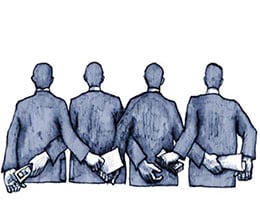 Kleptocracy is a form of government which is characterized by the systematic and institutionalized theft of public funds and goods by its elites.

In a kleptocracy government, rulers and like-minded elites engage in robbery in a normalized way. To such an extent that there is an institutionalization of corruption. In democracies, theoretically, the income and money obtained after government tax collection is reinvested in the form of public services.

The logic that a kleptocracy follows is not the one recently mentioned. It is true that it is impossible to steal all the collection of a country, but it is carried out, with the purpose of personal enrichment, the looting of a large part of it from the population.

It cannot be said that it is a form of government per se, but rather it is a defining characteristic of the regime. That is, a regime can be authoritarian, totalitarian, democratic, etc. We will say that any of these regimes is a kleptocracy if the corruption has reached such a point that it is carried out in an institutionalized and routine way.

The country that suffers from kleptocracy, with the passage of time, falls into economic decline. This, given that the State is at the service and subjected to the looting of the rulers, the economic variables tend to be negative. In addition, these countries tend to appear very high in the rankings of the most corrupt nations.

A series of characteristics are common to all kleptocracy:

The kleptocracy uses all the tools and forms in which political corruption manifests itself:

As we see, in a kleptocracy, all the possible ways in which corruption manifests itself are present. Since justice is controlled and subject to the orders of the executive, a free way is established to loot the country and the institutions.

Here are some examples of territories that have a kleptocratic system:

Use The Download Button Below...
TOPICS:Advantages and Disadvantages of Kleptocracy