Functions Of The State 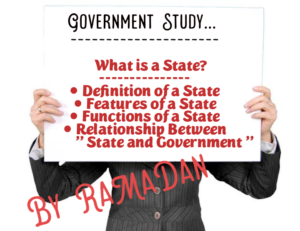 When we speak of the State, we may be talking of it as one of the institutions of the society. it is the arena for the exercise of power in the society.

This does not mean that other societal institutions such as the family, religion, economy and the school do not exercise power

They do exercise power and also provide an ideology, which sustains or challenging the dominance of permanence of the State. The supremacy of the state to other institutions of society is, however, indisputable.

In the world of Miliband, the state refers to a number of particular institutions which together constitute its reality, and which interact as part of what may be called the state system.

The major institutions of the state include government, political parties, the military, and electoral commission. In concurring with this view, Ken Post opines that the state is a group of institutions (apparatuses), which regulate and direct the common affairs of the society by providing a structure within which policies can be made and executed.

Some of these institutions are, in some way, biased towards the ruling class.

The state is, obviously, not an entity that does things as many students tend to believe. Only people can do things. The people who do things in the state are the politicians and bureaucrats.

These people who gain access to the state apparatus and claim to work on its behave tend to control the state and its resources and use them to formulate policies that appear to favour some groups either directly or indirectly.

As such the state cannot be no to an autonomous. This partly explains why the state or its principal-agent, the government, does not somewhat work in the interest of the ordinary people.

The state and the government, for obvious reasons, perform similar functions. The major functions of the state are as follows:

The state has a responsibility to provide social amenities and infrastructures (e.g. water, electricity, roads, etc.), which enhance the welfare of the people. These things are of common interest to the people and private individuals may be unable to provide them either because of the huge capital involved or their unprofitability.

The state provides the most favourable conditions for individuals to realize their personal goals and objectives. For example, the protection of civil rights and liberties, the security of life and property, the provision of free education for the less privileged and the encouragement of effective participation in government may encourage an individual to maximize his potentials.

It is the duty of the state to promote high moral standards among the citizens. It may achieve this goal in several ways: first – by encouraging regular religious devotion in schools; second – by making compulsory the teaching of religious studies, citizenship education and civics at all levels of the education system; third – by ensuring a just and equitable distribution of wealth in the society and fourth – by re-ordering or re-arranging the values of the overall society.

Related Topic ~  Rights and Obligations of Government in a State

A situation in which a few live in affluence and the majority wallow in abject poverty is not only unjust but morally wrong.

Relationship Between The State And Government

There is a good relationship between the state and government as demonstrated in the following:

Use The Download Button Below...
TOPICS:Major Functions of Modern State

Be the first to comment on "Functions Of The State – Government"