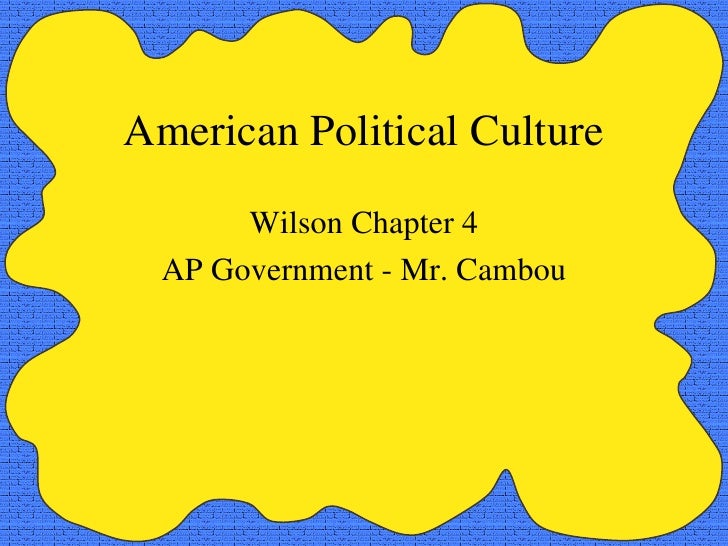 Political culture is that aspect of the culture of a people, which deals with politics. It refers to the set of attitudes and beliefs that relate to the political system and political issues and objects.

In other words, political culture refers to those things, which the people carry in their heads in relation to political objects and events.

Political culture deals mainly with what the people believe about the government, political parties, pressure groups, politicians, etc. It has to do with the people’s orientation towards the formal and informal political structures.

Every political culture is a product of several interrelated factors. They include;

The history of a country may affect its political culture. The political culture may develop rapidly where there is political continuity and the older values have been allowed to merge with modern values undisturbed by internal strife, military coup of foreign invasion.

Imagine the level of development which the some countries would have experienced if there had not been military intervention in the Politics of the country.

Similarly, with more than 12 years of uninterrupted civil rule in Nigeria, for example, the electorate are becoming more active today than they were in 2003 with people now insisting that votes recorded at polling stations must be counted in their presence.

Geographical factors may also affect a country’s political culture. These factors include size, location, population and availability of resources.

For example, Britain’s insularity (an island nation surrounded by water) protected her from external invasion for several centuries and allowed the political culture to develop without interruption.

The size of Nigeria and her abundant resources and military capability may make succession or any foreign attack implausible or risky. As a result, States may have no choice but to accept existing political structures.

Where ethnic consciousness is high and the various ethnic groups Direct the loyalty of their members to themselves rather than to the national government, there is bound to be political instability and an undeveloped political culture.

Sometimes, ethnic differences only marginally affect political attitudes especially in situations where the national government has succeeded in inculcating the values of national consciousness in the people.

If the allegiances of the ethnic groups are directed to another state, the political culture of a country may be adversely affected. artificial nature of the boundaries of many African countries has led to the devision of ethnic groups between countries and this has negatively affected their loyalty to the state.

For example, the incessant political conflicts between Ghana and Togo especially in the immediate post-independence era are primarily attributed to the inability of the EWE people, split between the two countries to accept the political structures of Togo.

The level of industrialisation and urbanisation may also affect the political culture of a country. The more organised and industrialized a country is, the greater the likelihood of loyalty to the nation.

On the other hand, there tends to be a greater loyalty to local and parochial institutions among a population which is predominantly rural peasants.

The people who live in rural and farming communities are generally conservative and have a general resentment of governmental activity and an ignorance of its scope and little awareness of how the policies of government can be changed.

Politicians in our own political environment tend to capitalise on this fickleness of the rural folks to buy their votes with peanuts during elections, but at the end, leave the rural areas perpetually underdeveloped.

Use The Download Button Below...
TOPICS:Factors Affecting Political Culture