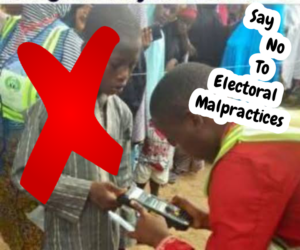 What is an Electoral Malpractices?

Malpractice means bad or improper behaviour. Failure to carry out a duty as expected may also be considered a malpractice. Therefore, electoral malpractice is the manifestation of all forms of electoral misconducts, capable of derailing the electoral process.

It is always there before, during and after election periods some influential politicians, electoral officials, security agents, electorate, etc, are the major players in this social menace.

The act is perpetrated in order to gain advantages over others, especially, when it comes to acquisition of political power through electoral process.

Some of the causes of electoral malpractice are discussed below;

Poverty is one of the causes of electoral malpractice, especially in African Society. The rate of poverty in most African countries is so high that politicians now hijack this ugly situation to satisfy their selfish ends. They give out money and engage in various malpractices.

The inabilities of most people to read and write had denied them the opportunity of knowing what to do right. Most are the rural people or city dwellers and politicians take advantage of their ignorance to lure them into one form of election malpractice or the other.

Most of the ethnic groups in many country would want to engage in one form of electoral malpractice or the other in order to have their people in the corridors of power. The reason is because most of them want to be relevant in the political dispensation of the country. The Hausa-Fulani of Nigeria society is a typical example.

Lavish and unnecessary spending of public funds by politicians is one of the causes of electoral malpractices.

They are over ambitious and would want to be in office at all cost. Many of them are not popular in their constituencies and so the only way out is to rig elections, manipulate and falsify electoral figures.

Some politicians who have lost at the polls many times, may engage in different unlawful means to win the election.

Some foreign countries are secretly involved in sponsoring some candidates or political parties in other countries. They strictly monitored every electoral activities in order to make sure that they favour their candidates or political parties. This may result because they want to protect the economic advantages they are enjoying in the affected country.

The effects and consequences of electoral malpractices are;

TOPICS:Causes and Effects of Electoral Malpractices