Attributes Or Characteristics Of Good Government

Government is the system or group of people governing an organized community, often a State. In the case of its broad associative definition, government normally consists of legislature, executive, and judiciary.

Government is a means by which organizational policies are enforced, as well as a mechanism for determining policy. Each government has a kind of constitution, a statement of its governing principles and philosophy. Typically the philosophy chosen is some balance between the principle of individual freedom and the idea of absolute state authority (tyranny). 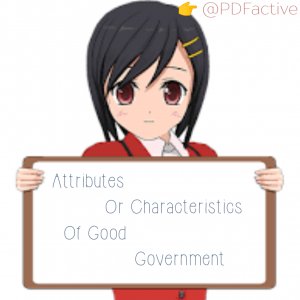 The Following are the major characteristics of good government.

It is a guide to the activities, beliefs and behaviour of the citizens. These are laws made by the government and entrenched in the Constitution. The actions of those in government, their limitations, rights, duties and obligations of citizens are all outlined in the constitution.

The political power which the government has is in consonance with the people’s will to obey laws and policies made by the state.

Government needs enough revenue for the enormous task facing it.

The civil service possesses adequate personnel for policy making and implementation, interpretation and punishment of offenders.

A Government should be able to earn for itself legitimate support from the people and this produces peace and stability in a system.

Provision of some essential services, e.g. water, electricity, housing etc should be made to improve people’s well-being. This is essential for any responsible government.

No government is permanent, especially, one that is based on people’s participation (elective government) hence the adoption of periodic elections. In some systems, it could be either five or four years to change a government.

It is incumbent on the government to provide enough protection and security to the people.

Use The Download Button Below...
TOPICS:Characteristics Of Good Government