Battle of Poitiers: Armed conflict during the 100 Years’ War, which confronted the kingdoms of France and England.

What was the Battle of Poitiers?

The Battle of Poitiers, which took place on September 19, 1356, was one of the most important acts of arms of the  100 Years’ War, which pitted the kingdoms of France and England against each other.

Some historians call it the “2nd Battle of Poitiers“, to differentiate it from the one that, in 732, pitted the hosts of Charles Martel against an Umayyad army that had invaded the Merovingian kingdom of the Franks.

Historic Context of the Battle of Poitiers

After the victory at Crécy in 1346, the English organized great cavalcades, which were rapid and violent raids on the rural areas of France.

The English landed, entered French fields, burned crops and villages, killed men in their path, and returned to their coastal bases.

The objective of this strategy was to generate discontent in the civilian population and to confront it against its own Crown. The peasants, not feeling protected from English incursions, were reluctant to hand over their young men when the king’s men organized levies to swell the French armies.

In August 1356, Edward, Prince of Wales, also known as the Black Prince, led a great ride to devastate the rural areas north of the city of Bordeaux. The Black Prince, who was the son of King Edward III of England, did not meet much resistance in his wake, so he managed to raze numerous villages.

But when he reached the bank of the Loire river, he could not take the castle that protected the city of Tours. The English tried to set it on fire, but the fall of a great downpour frustrated their purposes.

When the French King John II the Good learned of this resistance, he decided to attack the English, for which he assembled an army north of besieged Tours. This army, which had about 11,000 men, consisted of 8,000 knights and 3,000 infantry, including crossbowmen and a Scottish contingent. It was much more numerous than the English, but slower, since its horsemen were protected with heavy armor.

The army led by the Black Prince consisted of 3,000 horsemen who were devoid of armor, 1,000 infantrymen and 2,000 archers carrying long bows. These had a rate of fire several times higher than that of the crossbows used by the French.

Development of the Battle of Poitiers

Before the battle there were negotiations to reach an agreement, but the only result of those talks was a truce of 24 hours not to fight on a Sunday, something common in the Middle Ages.

The Black Prince placed his troops with their backs to a forest, so as to avoid attacks from the rear. On the flanks he planted the archers in wedge formation and concealed a small unit of cavalry in the forest.

King John divided his forces into four groups, led by 300 knights accompanied by German mercenaries armed with pikes. The objective of this group was to charge on the English archers.

The armor of the French knights was invulnerable to arrows, because they broke on impact. For that reason, when the Gallic cavalry charged against the English infantry, the archers shot their arrows at the horses. The results were devastating, as the attackers retreated.

One of the sons of Juan II, the dolphin Carlos, renewed the cavalry attack, but was repulsed by the English. He then attacked his infantry but after a fierce fight he fell back to regroup. Seeing this retreat, what must be the next wave of French infantry, he became frightened and fled.

King John decided to personally take command and ordered the rear to bring in new horses, with which the fight continued. It was then that the English cavalry, hidden in the woods, went out into the open, made a detour and attacked the French from the flanks and rear.

The French, terrified of being surrounded, tried to flee, but did not succeed, so King Juan, his son Felipe and several nobles were captured by the English. 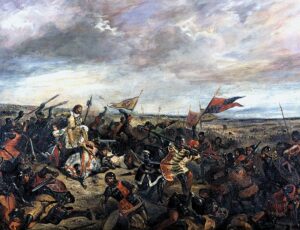 The Battle of Poitiers (1356), painting by the romantic French artist Eugène Delacroix.

Consequences of the Battle of Poitiers

The main consequences of this battle were the following:

Use The Download Button Below...
TOPICS:Battle of Poitiers - 100 Years' War